9 – 20 December, 2016 – After a chaotic boarding procedure in Iran, a departure delay of almost two hours and a pleasant Persian Gulf crossing we arrived at Dubai harbour at 4pm. By the time we had left the boat and passed the immigration checks it was dark. We still had to cycle around 25 km to our friends’ house and quickly got going. The streets were well illuminated and so were all the fancy shops we passed. We were riding along the beach road – the smallest road we could find on our map – only to find out it still was a four-lane highway. Big and fancy cars passed us at 100 km/h on this shoulderless street. If we were lucky and the passing lane was free they would give us enough room to overtake, if not we had to share the lane and hope for the best. At best they would honk angrily to let us know we’re not wanted there. After about 22km and an hour later, having passed the poshest shops we’ve seen in five months selling about everything we’d almost forgotten about, we finally left this highway. Relieved we took a deep breath, thankful we made it this far unhurt, only to see us cycling onto an even bigger highway, this time three lanes wide. At first we thought, well, at least there is a shoulder. But after a few hundred meters we noticed we had to cross these three lanes – at night, with fast and constant traffic. Somehow we made it and even managed to avoid another three-lane crossing by pushing our bikes through deep sand. The last three kilometers took us almost as long as the the first 22km! Dubai has been clearly built for motorists. We cycled in many metropolises before including Istanbul, Bangkok and Delhi but never ever had we experienced anything as difficult as this. Finally at our destination we were warmly welcomed by the Ferrault family.

Dubai was shocking at first. We had been cycling for five months in some of the poorest countries in the world, including two months in Iran where most western brands are banned and even in the most touristic cities such as Esfahan or Shiraz there weren’t any restaurants serving a single western dish. And in Dubai there was suddenly everything. From beautifully and expensively decorated luxury shops, modern clinics, posh cafés and even posher restaurants to luxury 6-star hotels. There would be a small traditional shop selling dishdashs (traditional men’s outfit of this region) next to a Starbucks next to an old mosque next to a Lamborghini reseller next to a McDonalds next to an Indian tailor sewing on an old-fashioned sewing mashine. The Dubai Mall is the biggest shopping mall in the world. We’ve never seen anything alike – wide alleys, beautifully decorated and shops selling all the things we don’t fancy (anymore). 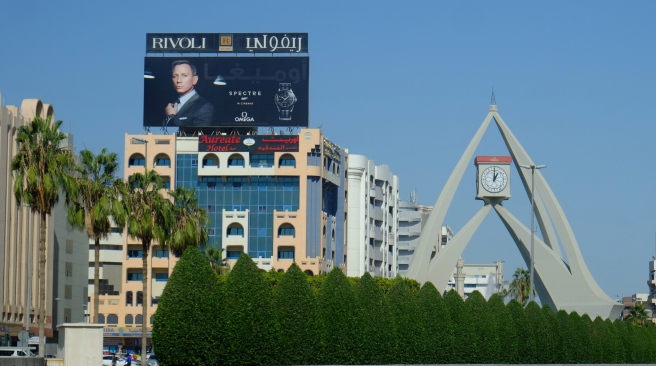 And Dubai was fantastic at last. Nathalie and Stéphane could not have been any better hosts. We had a lovely room with a real bed – a luxury after months of sleeping mainly on the floor – and I slept like a baby only to wake up again by the distant morning call for prayer. At their beautiful house we felt home at once and enjoyed every minute. Together we went to see Old Dubai, had a barbecue in the desert, went to nice restaurants, once even with a vista of the Burj Khalifa and a water fountain show in front of it, drank wine and beer, a long missed treat especially for Johan and had a really fun time. At the cinema we couldn’t believe that our snack was served in the theatre! We also spent a lot of time at the house, catching up on email and Skype with friends and family, enjoying their garden and pool and refilling our batteries. Thank you Nathalie and Stéphane for a wonderful time!

Into the Arabian sands:

A stroll through Old Dubai by the Creek: 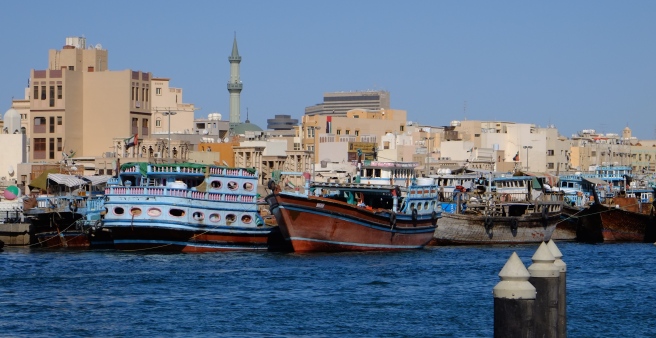 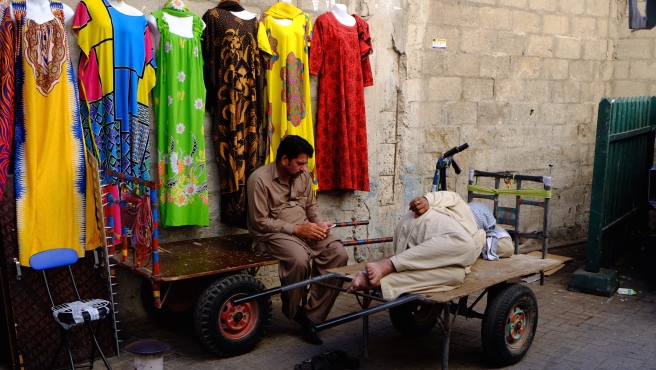 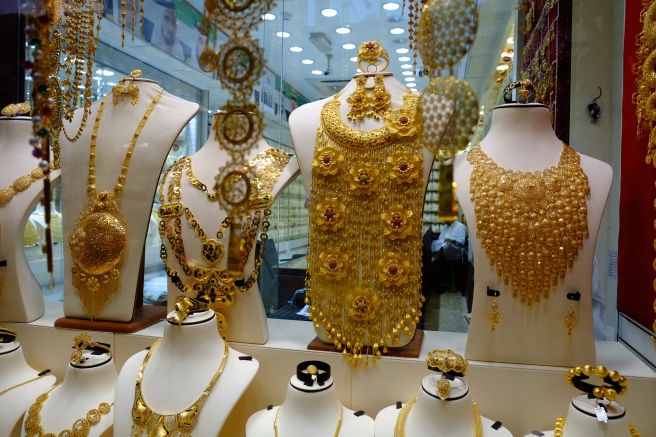 Dubai was a great experience, also to see so many different cultures living peacefully next to each other. At the beach you see women in the smallest bikinis sitting next to an Arab family with women fully covered. Nobody seems to be bothered about anything and everybody does what they like.

Time flew by and after about a week we moved on again to cycle through the desert to Oman. Would we have liked Dubai if we hadn’t been with such hospitable and caring hosts? I doubt it. We are definitely no big city fans, even less so if they are so cycling unfriendly. In the end it once more all goes back to the people you spend your time with and how they make you see a place.

Leaving Dubai was OK, less stressful than arriving despite the huge highways. We spent the night camping in the desert only to find ourselves at an important entry point for desert tours with 4WDs and quads passing our little tent all night. On the day we were supposed to cross the border we stopped at a shopping mall in Al Ain, when two Emiratis started talking to us and invited us for lunch at a Café. They didn’t order anything, but made sure we ordered enough to eat. They paid, left and left us baffled. At the border we paid our UAE exit fee and cycled another 50km to the Omani border post always wondering if we had missed it but right before dawn we made it, bought our visas and pitched the tent just a few hundred meters away in the bush.