09 – 20 August, 2015 – 200m later around the corner we reached the top. No sign indicated that we were at over 3,400m. We took a few photos, enjoyed the view, put on a few more clothes and then cycled downhill. Finally! We passed a few yurt camps before we decided to stop at a smaller camp with lake view, pitched the tent together with three handy children and joined the family for Chai (tea), bread and kumys, which is fermented mare milk and a beloved national drink in spring and summer. It has a little alcohol and tastes very sour with a slightly prickly feeling on the tongue. It is drinkable but not really our taste, especially as there are all kinds of other indefinable things swimming in it.

Communication turned out to be quite difficult as my Russian is very limited as well as their English. Now was the time to make use of our handy Russian-German dictionary with useful phrases as we were trying to find out at what time we could get dinner. The closest we could find was the sentence “Will there be warm food?” Later on it would prove to be even less useful when checking for a hostel room with sentences like “Do you have a room with sea view?” Going back to sign language or our pictionary still proves to be the best option.

At slightly over 3,000m the Song Köl area is only accessible between early June and late August. During this time, herders build their camps and move up their cattle. At the same time it is school holiday, so the farmers can take their children with them. We were amazed about their way of living and about how they bring up their children. They are used to work, older children take care of their younger siblings, girls are helping with the cooking, getting water from the nearby river, boys are herding the cows, sheep or horses. Everybody is busy all day long, but on the other hand it still felt very peaceful and relaxed to us. The adults would get up when it gets light while the children continued sleeping all next to each other in the sleeping Yurt. We all would have an extended breakfast with greasy noodles fried with onions and the mandatory Chai before heading off around the lake.

The lake is ringed by a saw-toothed horizon of peaks, fronted by lush summer pastures. Herders’ yurts dot the shore side meadows every kilometer or so. We felt like cycling through a Hollywood setting for a Western movie with cowboys on horses near and far. We could hardly get enough of this beautiful scenery, all the pain to get there was forgotten. 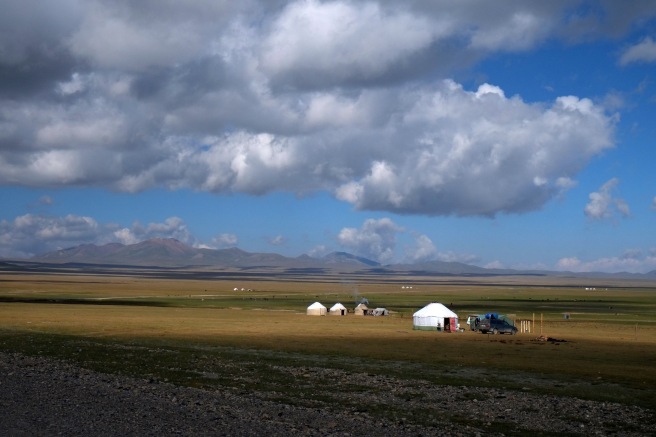 Over another pass and down via 33 switchbacks we left the area and now descended with more stunning views over the valley and high snow-capped mountains we knew we had to cross soon as well. 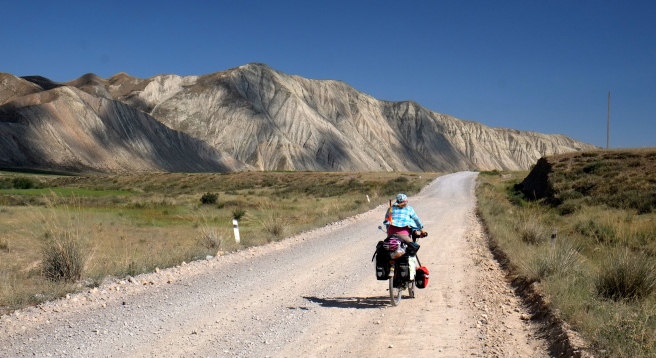 Pass after pass after pass we climbed on still unbelievably bad roads and we made slow progress towards Osh. One day we had to stop early as I was unwell. Soon I started vomiting and it became clear we wouldn’t be able to traverse the last pass before Kazarman. A few days later Johan spent most of the rest day in bed respectively on the toilet as he now suffered from diarrhoea. We nonetheless continued the following day as I had to finish a job and we knew there was another 3,000m pass to overcome. It’s been a tough day with weak bodies, endless undulating roads, pebbles, rocks, dust and the sun burning relentlessly. Temperatures in their high 30s and speeding Audi 100 – 50 % of the local population is driving this make, the other 50% drives in Japanese cars with the steering wheel on right – didn’t make the journey more pleasant. But we endured and pitched our tent at the foot of the pass next to a river where we could wash and cook and relax our bodies. 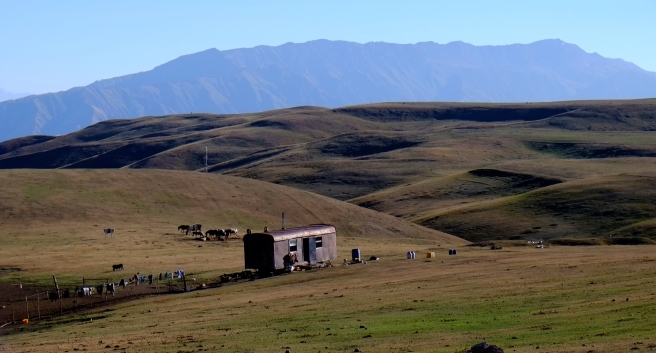 Then came our lucky day. Cycling slowly up the last pass before Osh on another cloudless and hot day we soon met a German in her 4WD treating us with “Nimm 2” (German candy) and refilling our water bottles. A few kilometres further up another German car stopped, two guys participating in a race from London to Mongolia stepped out and refilled our water bottles once again. Later, we were just cooking a big pot of yummy spaghetti, three cars from France and Belgium stopped. And again, they treated us well, refilling our water bottles once more and giving us Swiss chocolate. 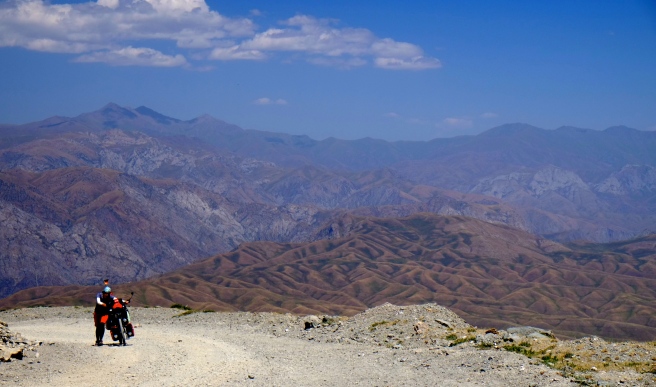 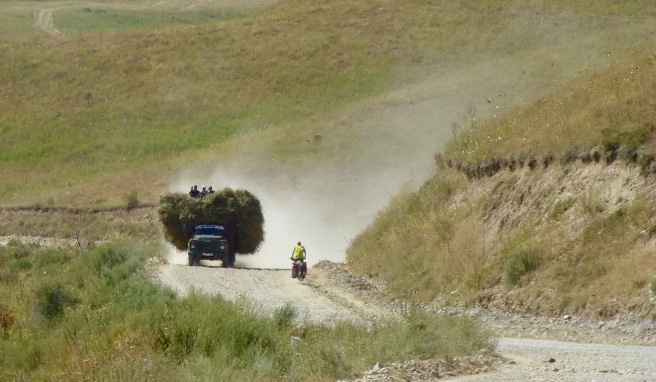 Traversing the pass we officially entered South Kyrgyzstan. And in many ways this area felt like a different country. Hotter in terms of climate as well as human temperament and closer to the conservative Islamic culture than the industrialised, Russified Bishkek. People however are unfailingly hospitable, giving us fruit or vegetables when passing by and welcoming us in every village with their hellos, welcomes or bye-byes.

The landscape changed as well. From arid, rugged and mostly treeless and often yellowish dried countryside to a now still mountainous but much more fertile area with apple, walnut and plum trees lining the streets and giving us the much-needed shelter from the sun. We continued wobbling over rocks, pebbles and sand, sweat running down our faces and bodies, breathing in dust, up and down and once more up. The river roared hundreds of meters below us and we couldn’t wait to finally roll downhill and to finally meet tarmac again. After a few more hours of strenuous cycling there it was: a village and tarmac. We tried to buy lunch, but all we could find in the first shop was a drunk elderly couple savouring a glass of vodka and in the second shop two 4-packs of yoghurt, a package of crisps and another package of sweet biscuits. Hungry, we sat down under a tree and ate like starving wolves, when some children came running to watch us, going away again to pick sunflower seeds that they were currently drying on the roads. They clearly understood how hungry we were and their empathy and this nice little gesture meant a lot to us.

Once we hit the tarmac cycling felt like flying and we enjoyed the smooth ride despite traffic picking up again. Within a few days we reached Osh and celebrated our achievements to date: by now we had traversed six passes and gained 10.000m.  With two rest days we prepared for the real challenge – the Pamir Highway.

Cycling was’t easy these past weeks. However, we are enjoying every day, our freedom, the beautiful landscapes and that we are able to do what we do.

One thought on “From Kyrgyzstan to Pebblestan”