23 August – 8 September, 2015 – As the Pamir Highway has been an important milestone of our journey you’ll find below our diary entries with the highlights of every day presented in four parts.

Day 10: Murghab – Alichor: 107km, altitude gain 841m
Early start and fantastic weather: no wind and another day with clear-blue sky. Shortly after Murghab we pass our first military checkpoint. We are now cycling through the Gorno-Badakhshan Autonomous Region for which a permit is needed. Our passports are thoroughly checked, details entered into a journal and ten minutes later we continue. We pedal up our first pass of today of 3600m, a piece of cake as we start climbing at 3500m. The coming hours the road is undulating uphill through a valley, we cycle through small canyons and to our left and right are red rocky mountains. Again hardly any vegetation, only a few thistles, succulents and grasses line the road. After the second pass of over 4100m the landscape becomes boring with a wide valley and brownish mountains around us. We feel a bit like in the movie ‘Groundhog Day’ as the road follows the same pattern over and over again: uphill, then left and downhill, another right turn and then uphill again. Despite the headwind as of 3pm we make good progress and end up at another homestay where we wash ourselves in the same room where we eat and sleep. We get two buckets, one filled with warm water. Our room also seems to be the only room where the phones can be charged and while Johan is standing naked in one of the buckets one after the other person tries to come in to check the status of the phones – of course without knocking on the door first. To avoid any embarrassments we watch the door until we are finished washing. The phone checking continues later on while we are trying to sleep. That evening we have a good laugh as we imagine all these interesting features of Tajik homestays to be added to our own B&B upon our return. 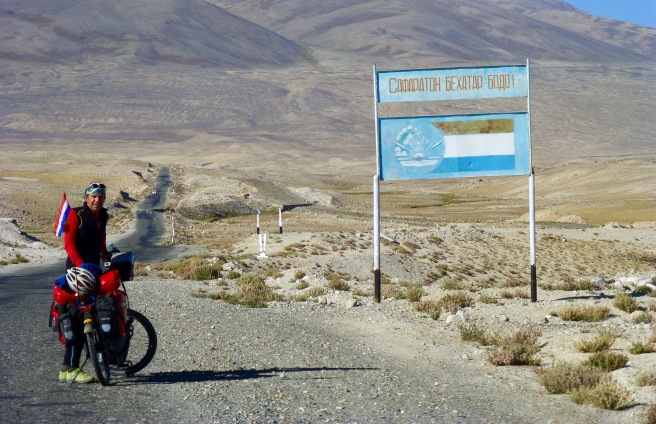 Day 11: Alichor – Kharghush Pass: 62 km, altitude gain 773m
25 km asphalt and then we leave the Pamir Highway to cycle a loop through the Wakhan valley along the border of Afghanistan, only separated by the river Pamir. Other cyclists told us not to be worried about the Taliban as they can’t swim. So we don’t worry. We first cycle on a pretty bad road through sand, over rocks, up and down and up again, along a few salt lakes until we finally reach the pass. With a strong headwind and steep gradients we often have to push our bikes – now we know why they are called push bikes! After the summit the weather doesn’t really improve but we move on to find a camp spot at lower altitude. We pass another military checkpoint – this time with armed soldiers who are first asking for cigarettes and then for earphones – we pitch our tent with a vista of Afghanistan and the Pamir River. Traffic is almost non-existing:  today we meet 5 French cyclists and 3 cars pass by.

Day 12: Kharghush to the middle of nowhere: 22km, altitude gain 152m
A day we don’t want to remember. Extremely strong headwind and a maddening bad road prevents us from making any progress. At 3pm we have a huge argument: Johan wants to continue for about 9km – the last hour we only cycled 3km – and I want to stop as we’ve been cycling to the limit for the past days. Shortly afterwards we find the perfect spot for our camp next to a river and hidden under trees. At night Johan wakes up with a start as he dreamed that the Taliban were trying to kidnap us and I wake up because I hear strange noises. For the rest of the night Johan keeps his knife in his hand to protect us from the evil. Today we meet one Dutch cyclist and two cars are passing by.

Day 13: Middle of nowhere to Langar: 44km, altitude gain 396m
We are descending from 3600m to 2800m and are still climbing almost 400m! Does that make any sense? We keep meeting cyclists who tell us we would only descend as from now and they lied! We promise each other to tell the next cyclist that they would soon cycle on tarmac again and that the next pass is a piece of cake! Other than that the day is great, well rested legs, no wind all morning and scenic surroundings, looking all day at the infamous mountain range Hindukush and the roaring turquoise river Pamir – at least when the road allows. In the evening we check-in at a homestay with a perfect German-speaking landlady. A film crew from the German TV station mdr shooting a mountaineering documentary has checked in as well and we spend a nice evening chatting with them. Today it’s been busy on the road: 2 French and 2 Swiss cyclists, 7 cars and 3 trucks full of workers at the back. 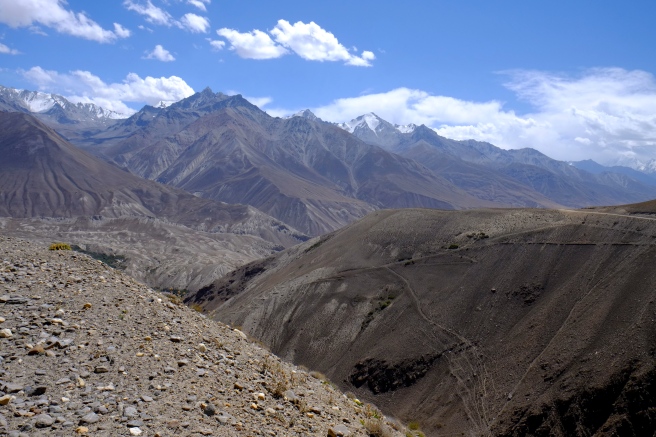 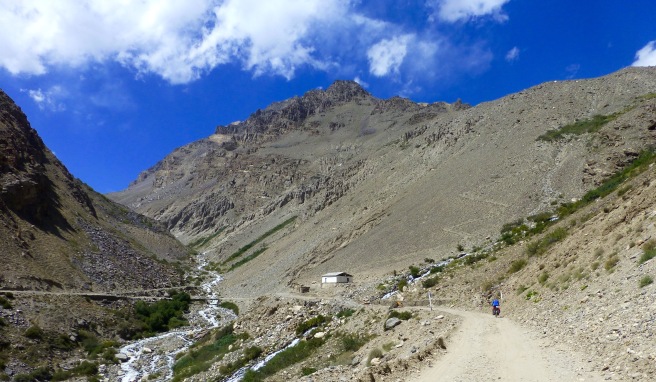 Day 14: Langar – Ptup, 46km, altitude gain 350m
Late start and never-ending bad roads. Whoever told us that the roads would become better after Langar is a liar. Either we go through sand, over huge rocks, washboard or 20cm deep gravel. And yes, there is some asphalt as well, but that is melting, so once again no pleasure to ride on. By the evening our bottoms are sore and hours later we are still shaky from the bumpy roads. But enough ranting. The landscape has changed a lot. We are now at the wide river Panj, again marking the border between Afghanistan and Tajikistan. The valley is semi-arid and apart from occasional clusters of shrubs or willow, birch and other small trees the landscape remains barren. The villages that emerge every few kilometers seem like small oases to us with all the trees, fields and vegetable gardens we haven’t seen since Osh two weeks ago. Between two villages we see about 10 to 15 men far away at the river, a rubber boat trying to get to the Tajikistan shore and five big 4WD cars waiting next to the road. My first thought is that they are fishing, but Johan’s got a better idea: the men are smuggling drugs from Afghanistan to Tajikistan. It is estimated that as much as 50% of Tajikistan’s economic activity in the last decade was linked to Afghanistan’s narcotic trade. We try to get away from there as quickly as the road allows. Today we meet a group of supported German cyclists, 1 truck and about 20 – 30 cars.

Day 15: Ptup – Ishkashim: 18km, altitude gain 341m
Another day we’d rather forget. We leave with Johan having severe stomach cramps on a sunny and stormy day. Guess what – we are cycling into the wind. Four hours later we are just 18km further, having pushed our bikes up most of the time due to the storm. Johan marks the road as I did a few days ago. We hire a taxi to Ishkashim as we know we won’t make it by bike, given the weather and road circumstances.