Please note: We slightly changed the layout of pictures including tiled mosaics and slide shows. If you scroll over or click on the photos you will be able to see captions in mosaics, in the slide shows they are shown automatically, but are sometimes a little harder to read.

28 February – 27 April, 2016 – After a sleepless night in the aircraft and a little nightmare of finding a big enough taxi to drive us and our big bike boxes to our guesthouse in Bangkok while trying to make ourselves understood – suddenly nobody would speak a word English anymore – we arrived shattered after a far too long ride through Bangkok. Our taxi driver had no clue where to go and  his lack of English didn’t make it easier when he tried to talk to his smartphone. “Ep Ep Gephaaa….” he would yell a hundred times. I couldn’t help but laugh and tried to make myself understood that I could try to speak into his phone to find the “F. F. Guesthouse”, when he suddenly held the phone in front of Johan’s face who would just repeat “Ep Ep Gephaaa” instead of helping the poor man. And that wasn’t even meant as a joke, he just didn’t get what the taxi driver was looking for.

Right before leaving Dubai I got a call from home. My mother had broken her ankle and needed surgery and with my father being sick as well, I decided to fly home for a few weeks to take care of them. So I spent the following days in Bangkok booking flights and packing up things while Johan prepared for his solo ride to Phnom Penh in Cambodia and back.

And here are some of Johan’s pictures from his ride in hot Thailand and Cambodia: 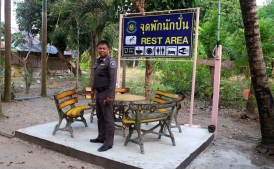 Food and accommodation for free at a police station

In the bus with my neighbor of 143

On March 28 we were happily reunited again and a few days later we pedaled north. We both were happy being together again and I was happy to be able to cycle again. But not for long. We were cycling during the hottest period of the year and always tried to get up really early to cycle during cooler dawn temperatures. In fact the heat was so unbearable that we mostly stopped cycling after lunchtime. One early afternoon temperatures climbed as high as 47 degrees Celsius – our hottest ever. We spent a few days in Kanchanaburi, famous for the “Bridge on the river Kwai”, that was built during WWII by mostly war prisoners. It is estimated that more than 100,000 people died due to too much work, a lack of food, malnutrition, heat and diseases.

Road scenery on our way to Kanchanaburi:

Leaving Bangkok in the early morning 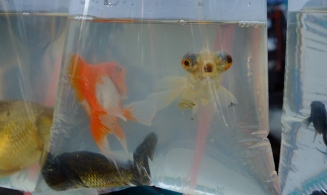 Dressed up girls for a monk ceremony 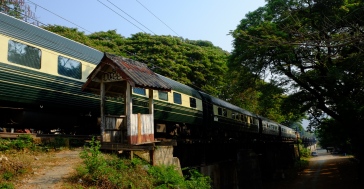 The bridge on the river Kwai

River Kwai bridge seen from the other side 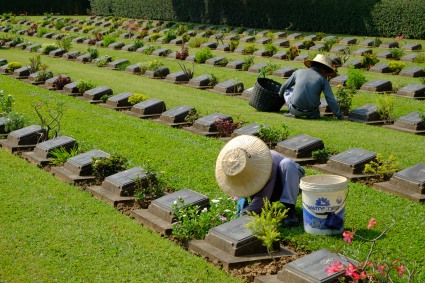 As we were at the same time preparing for the next stage of our trip in the Americas we found out, that we needed to have visas for entering the US, as we had travelled through Iran previously. At first that came as a big shock to us, meaning we had to return to Bangkok to get the paperwork done. But it turned out to be a big advantage as we got a multi-entry visa valid for 10 years and now will be able to stay six months in the US instead of three only. We were also afraid, that we might not have enough time to get the visas ready on time. Completing the online visa application was a nightmare. It took us a full afternoon for just two applications with the system crashing or not saving our entries. Second step was the visa payment to be able to get an appointment at the US embassy for our interview. Not an easy one as the bank employee didn’t speak a word English and this was her first money transfer. We now got really worried, when she called her husband who would act as a translator. About an hour later we left the bank hoping that the money would reach the recipient. And it did – the next day we got our interview confirmation and could finally start pedaling again.

We cycled north along the river Kwai to Sai Yok National Park through beautiful lush nature, visited an old temple on the way and walked to see the Hellfire Pass where the railroad passed in WWII. Most afternoons we would spend in our air-conditioned guesthouse rooms and soon we returned to Bangkok. We spent more than a week in Bangkok avoiding the heat wave as much as possible. We were glad when we finally had our bikes packed in another taxi and were on our way to the airport.

We couldn’t wait to arrive in chilly Anchorage, Alaska, to begin our second part of our journey – cycling the Americas.

3 thoughts on “Can someone please switch off the heating?”