25 October – 5 November, 2015 – We were ready to leave before 8am after a bad night’s sleep with noisy neighbors when two men from the local newspaper approached us for an interview without even asking if it was OK for us. Thirty minutes and many questions and photos later we left the mosque with a bag full of raisins and walnuts – a gift from the journalists. They filmed us while we were leaving the city and wished us good luck for our next part of the trip through the desert.

We were now looking forward to quiet roads and starry nights. The first night we camped behind some abandoned stables off the highway and while cooking dinner we were approached by a man in a car.  For minutes he talked in Farsi to us. When he finally noticed that we didn’t understand a word, he left again. We wondered for a while how he found us as we had followed a small track and thought nobody could see us here.

During the day temperatures still climbed well beyond 30 degrees and the cloudless sky and treeless desert left us with nowhere to shelter from the heat. Every once in a while people would stop to give us food or just ask if we were OK or needed anything. In the early afternoon we reached a small desert town and were stopped by a police car. By the time I caught up with Johan, he was surrounded by four men – three policemen and an English teacher. I got a little worried only to learn later, that the police had seen us earlier and as they didn’t speak English they had picked up the English teacher to welcome us. They wanted to make sure we would find a good place to sleep and food for the evening. I was overwhelmed when the English teacher asked us to tell our friends and families at home that Iranians are good people. That was not the first time we were asked that. Iranians feel pretty misunderstood by the Western world and they are extremely keen on being seen as hospitable and kind. Often we would be asked if we also thought that all Iranians are terrorists, as this is – according to their understanding – what BBC and CNN would broadcast.

After three days of difficult cycling through undulating barren landscapes and daily headwinds we reached the desert town Tabas from where we took the train to Yazd. Iran is four times the size of Germany or three times the size of France which made it impossible for us to cycle every single stretch. Trains in Iran are pretty cool, but leave at pretty uncool times, which again makes them very cool, as they are empty and a lot of train staff takes care of a few passengers. Our train left at 2am in the morning and we got our own comfortable sleeping compartment and our bikes got their own next to us. In fact, we were the only passengers in our carriage. In the morning we had breakfast in the train restaurant and we felt a bit like sitting in the famous Orient-Express.

In Yazd we checked into a far too expensive hotel for a shabby room and filthy shared bathrooms only to change the next day to a traditional hotel at the same price with our own clean bathroom. Yazd is one of the highlights in Iran with its forests of windtowers, the so-called badgirs and winding lanes through the mud-brick old town. We cycled through a labyrinth of small alleys, got lost in the huge covered bazaar and chilled with good coffee and food in one of the many rooftop restaurants while enjoying a fabulous vista of old Yazd. 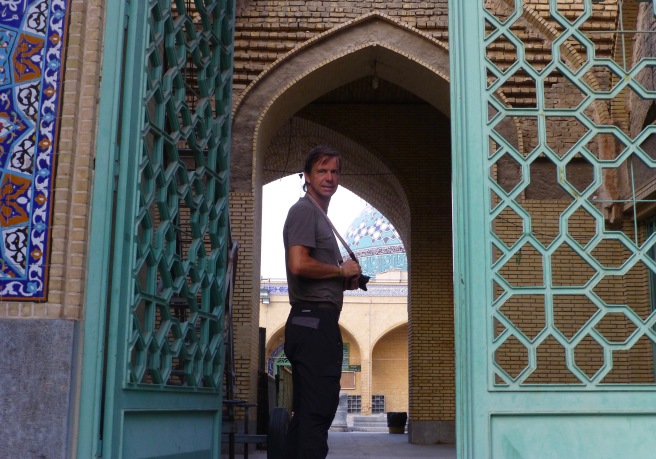 From Yazd we continued once more North in the direction of famous Esfahan. Unfortunately the wind had changed and instead of coming from the South it now blew straight into our faces. Cranky we continued anyway. Wind is the most unfair cycling condition and without doubt the most hated by cyclists. As our cycling friend Annika from Tasting Travels nicely put it in one of her blog posts: Mountains are fair as you know that after a long climb a downhill will follow. However, you cannot expect that a headwind turns into a tailwind the next day. Nonetheless we pedaled on and gave up at around lunchtime to visit an old castle from 4000 BC and the beautiful and much less touristy mud-brick town Meybod.

Even though we were still cycling through the desert it was clearly getting winter. The evenings and nights were cold with temperatures close to or below 0 degrees Celsius and during the day the quicksilver seldom climbed over 20 degrees anymore. On our way to Esfahan we camped two more times, once for free behind a what we thought abandoned caravanserai. We had just finished our abundant dinner of two hard boiled eggs each and were ready to crawl into our sleeping bags, when a car passed. It seemed that there were still people living at the caravanserai, but they either hadn’t seen us or weren’t interested, they left us alone all night. The second night we camped for very little money in a hotel garden.

Thanks to the headwind we made very little progress and needed four full days to reach Esfahan. The scenery was relatively boring compared to what we had seen before and on top we were cycling on busy roads without shoulders and often had to leave the road to avoid collisions with passing trucks. The last 40 kilometers into Esfahan were absolutely dreadful with extreme heavy truck traffic. We must have breathed in tons of diesel exhaust and cycling didn’t feel very healthy anymore. Additionally we were cycling through a vast industrial area with mainly steel and petrochemical plants. That day I thought to myself that this might be the first day we wouldn’t get anything from passing people. But also this time I was wrong. Right at the entrance of Esfahan we were handed over two pomegranates, 500 meters further we got a rice-dish – perfect for us as it was lunchtime. In the middle of the busy traffic in the city center a man stuck his hand out of his open car window with a bucket full of a yummy rice-and-saffron dessert. Iranians treated us once again very well! 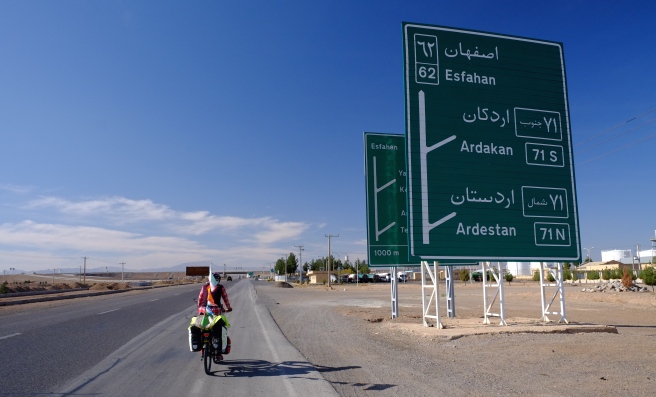 3 thoughts on “Through the Iranian Desert”